‘Tis the season for red carpets. And those star-trodden rugs have had more air time than Neil Patrick Harris’ tighty whities; cue the Globes, BAFTAs, Oscars and Brits. We’ve just rolled up our own movie-star mat post-AACTAs only to unfurl it afresh in time for the ASTRAS tonight. But the biggest chatter this Awards season has revolved around that three-word hashtag – #AskHerMore. 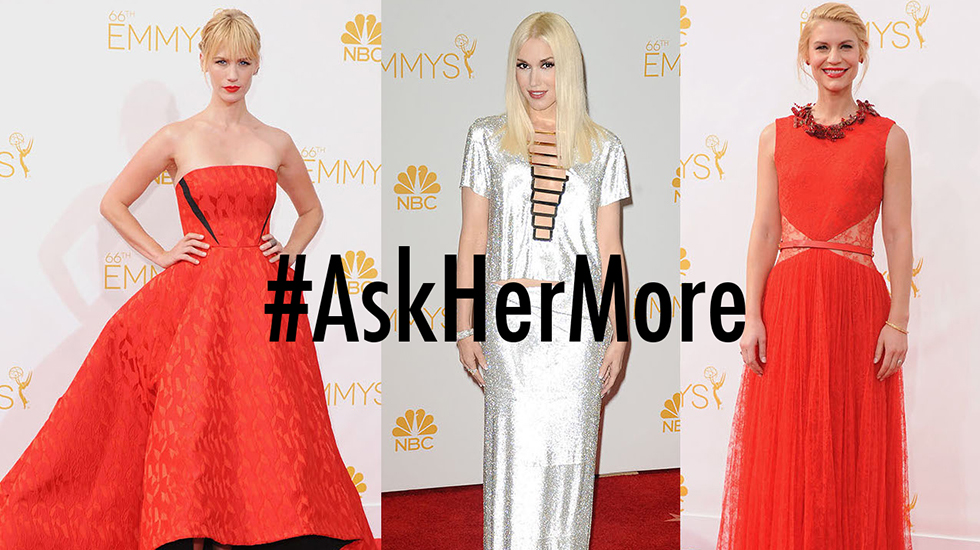 Aniston, Moore and Blanchett have inadvertently become the poster girls for this campaign urging red-carpet media to go beyond the ubiquitious question,

“Who are you wearing?”

The backless, um, I mean the backlash has stuck and the combined female star wattage has created somewhat of a movement. On Oscars night, Reese Witherspoon posted an #AskHerMore meme on her instagram account featuring her preferred on-carpet questions –

“What’s the biggest risk you’ve taken that you feel has paid-off? What accomplishment are you most proud of? What potential do filmmakers and characters have to make change in the world?”

All meaty, fantastic questions that deserve considered thought and reflection. But last time I looked, the only kind of reflection anyone had time for on the red carpet ricocheted off the hand-applied sequins on those six-figure gowns.

Look, I get it. These gifted women feted for their skills at wearing their ‘hearts on their sleeves’ on-screen, don’t want to chat about wearing anything else. It should be less red carpet, more ‘cred carpet’. Let’s recognise acting stripes not the couture version deemed on-trend by Klein or Valentino. Yes, we can be a tad obsessed by the stars’ carpet clobber. And mani-cam really did tiptoe into WTF territory. But I think it also poked good-natured fun at the red carpet madness.
Giuliana Rancic, host of E! Fashion Police sees her work for what it is,

“You’re in entertainment, it is make believe, it is fantasy and fun… so when you walk onto the red carpet, be ready to talk about that gown, embrace it, have fun.”

With a Masters degree in Journalism, Rancic is far from fashion fluffball, (a technical term). Her views on the miffed stars is as forward as her fashion picks,

“….sometimes you’ll look at an actor doing an interview and they seem a little stuck up or annoyed and I want to say, ‘Are you kidding me? I’m the vehicle to get your message to your fans.’ If I was an actor, I’d use it as an opportunity to remind your fans why they love you so much. Hugh Jackman does that very well.”

Yes – what about the men? Well, a tux is a tux is a tux; how many ways can Tom Ford spin this classic into something worthy of breathless commentary? Not that many. So I have one word for you – feet. There is gold below them there ankles.

Damn the mani cam, bring on the pedi cam. Male stars should remove shoes, show socks and then, well-buffed toenails. What a fantastic leveller. Yes, Channing Tatum looks magnficent in monochrome, but do his toes pass muster?

No, you’re right  it’s silly. Who wants to see Channing’s toes when the prospect of pec-cam is a far more appealing – and practical – concept?

As I see it, the red carpet is all about the flash; the cameras, the smiles, the fashion – and metres of VIP tape that can restrain rogue nipples. On March 12, I will be losing said carpet virginity at this year’s subscription TV awards, The ASTRAs. But I confess, I want to be asked about my dress. I may even beg.

My dress ain’t designer, it’s vintage; I’ve had it for 20 years. It has a faded label from ‘esteemed’ fashion house, Tuhot. It’s long, it shimmers, and, happily, it still fits – admittedly with a little scaffolding in place. The last time I wore this dress, I was in the arms of my late father, Dino, enjoying our last dance together. Dad is also the reason why I’ll be on that carpet. He inspired the show I produced and hosted and am now nominated for.

I love the idea of #AskHerMore, but I’m also Daddy’s little girl at heart who can’t wait for the bright lights and fun of the red carpet; I don’t think it can ever outshadow the reason why I’m there – and even if it does for a moment, fine. It’s just a game. And the point of a game is to…play.

So will I surrender to the ruby pile fashion trip? Well, I plan on giving it a red-hot go.

Phyllis Foundis is a writer, mother, producer, story hoarder and award-winning TV host of Foundis, a talk show for men, by men and those who love ‘em. A red-carpet virgin, Phyllis can’t wait to lose it – control underwear at-the-ready – for the 2015 ASTRA Awards where at the tender age of 44 she’s been nominated Most Outstanding New TV Talent. Her book, The Joy of Sags: Sexual adventures from the pre-menopausal frontline is out in 2015.

This site uses Akismet to reduce spam. Learn how your comment data is processed.